The end of the year brings odd lists.  We will cover parts of Ben Beach’s  list of the Top 10 Stats of 2017 in another post soon.  But this week also brought us, via Buzzfeed, Patrice Peck’s 37 Things White People Need to Stop Ruining In 2018.

Calling out any specific race or ethnicity is generally considered racist; Patrice subscribes to the idea that minorities cannot be racist.
As part of this odd bit of logic, she claims to “contextualize cultural happenings.”

There is some symmetry in her writing being our example of seeking context.

The concept of a white-people-specific list may remind you of last year’s MTV 2017 New Year’s Resolutions for White Males.  Both focused on a specific target race to attack, with advice.

Most of her 37 items are cultural or about taste, and therefore beyond the scope of Reality Dispatch.  For example, the use of brussels sprouts in macaroni and cheese does seem antagonistic to the memory we have of “Day-glo” Kraft mac-and-cheese, but then again, even that lacked anything resembling cheese… so who’s to say which is more unnatural?

But her Item #7 is that white people need to stop ruining “the United States of America”, with this graphic: 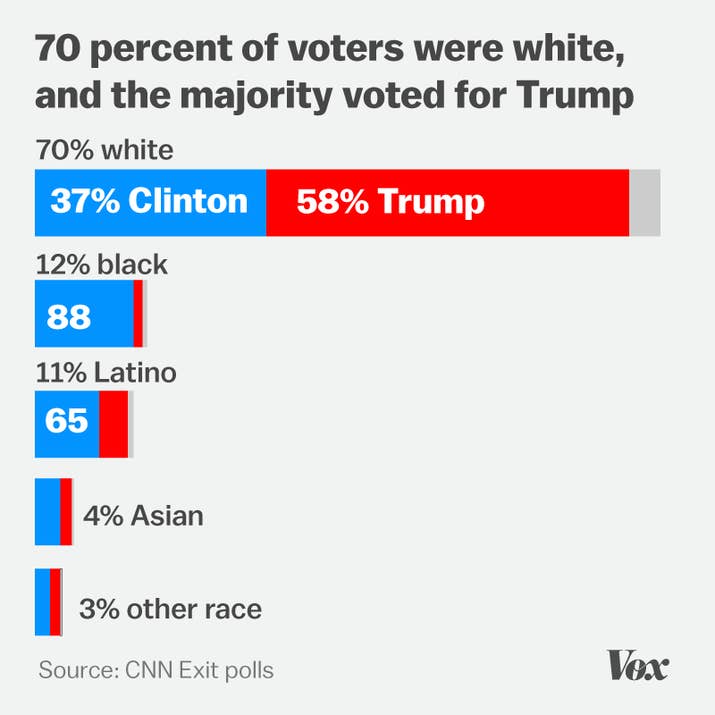 Interesting… Trump being elected (and the resulting lowering of unemployment and improvement in the economy) is “ruining America”?

The word “ruining” isn’t necessarily quantitative.  Patrice may feel the U.S. is worse because of, for example:

So how you feel about the state of the U.S. probably depends more on your values than on actual data.  Let’s jump instead to the question of the election and how Trump won the election.  Hint… the Democratic candidate won a larger percentage of the white vote than in the 2012 election.

There’s also the issue of the “popular vote”; black (and Latino) voters are concentrated in very blue cities… meaning that they live in the “urban” areas, while 80% of whites do not live in those areas.  This results in Electoral College favoring white voters, not because of racism (keep in mind the Electoral College predates black or female votes), but because the Electoral Delegates in the cities are elected by larger margins than the rest of the geography.

The Electoral College has electors (delegates) for each state equal to the number of senators plus representatives for that state, for a total of 538.  The House of Representatives represents the population.  The most populous state (California) has 53 Representatives, while Alaska, Delaware, Montana, North Dakota, South Dakota, Vermont and Wyoming each only have one.  Meanwhile, the Senate has two Senators per State.

This seemed fair to almost everyone until the Democrats realized that, while they had more Clinton voters, they had almost no Clinton voting territory.

This map by Ryne Rohla shows the precincts that voted for Trump (red) vs Clinton (blue.)  Clearly while Clinton won more votes, the vast land area of the U.S. did not vote for her.

The top “black” population centers are:

If you take out Texas and Tennessee, the rest are all in extremely reliable Democratic vote states; the black vote is wasted.  Similarly, it is wasted in Tennessee because the state hasn’t voted Democratic in this century.  And Texas makes Tennessee look liberal.

In short, by clustering in urban centers, blacks are losing their votes because they either are in reliably Democratic areas where another vote is meaningless, or so outnumbered as to make no odds.

Hillary won more people… by a tiny amount… but lost the territory by a massive amount.  15 vs 85 is not close.  By land-mass (well, land-area), 90% voted for Trump.

Who Put Trump Into Office?

That’s really Patrice’s point… that this was “white people”, ruining America.  But what does the data tell us?

It’s pretty clear, Patrice, that you got this backwards.

Google and Chrome track you, even when you tell them not to. We analyze some safer alternatives.

The Guardian, in pushing the #MeToo narrative on redemption, may have just destroyed the movement.

Reality Dispatch covers everything relevant and new. So why not the latest on Paul Ryan, the Syria bombing or James Comey’s meltdown? And what about the REALLY important stuff – the Blaine “Sumo” Paddle-Out?

The FBI breaks laws, or at least process, while attacking lawyers. Kaepernick throws his lawsuit away. And California cities join with each-other and the U.S. over California.

The feds seized Backpage last week. An in-depth look at why and how, and at the history around it.

A criminal right out of bad action movies testifies in court, and the National Guard is sent out to protect and guard… without ammunition… again?! (Do you remember the last time?)

A black super-hero movie and a redneck blue-collar sitcom both confuse the deep-blue media. Why aren’t they different?

The media is crowing that Trump’s China tariffs cost jobs. Did they?

The NYTimes claims the GOP is fleeing Congress. What’s the Reality? We do a full fact-check.

Do progressive “WOKE” ads help or hurt your revenues? Gillette’s earnings were shaved… see why.

Google and Chrome track you, even when you tell them not to. We analyze some safer alternatives.

How to analyze and refute attacks from the always-offended, using “Baby It’s Cold Outside” as an example.

How should the U.S. respond to the Caravan from Honduras? Let the R/D Flow Chart help you decide!

The Guardian, in pushing the #MeToo narrative on redemption, may have just destroyed the movement.

Reality Dispatch covers everything relevant and new. So why not the latest on Paul Ryan, the Syria bombing or James Comey’s meltdown? And what about the REALLY important stuff – the Blaine “Sumo” Paddle-Out?

The FBI breaks laws, or at least process, while attacking lawyers. Kaepernick throws his lawsuit away. And California cities join with each-other and the U.S. over California.

Scroll back to top